These heaters work both by radiating heat from the front of the heater and by drawing air through the front of the heater by a fan mounted on the back of the heater which then pumps the heated air through a system of pipes to outlets around the van. The heater is switched on by the knob on top of the heater, and the fan is operated by a small control box marked "Truma Vent" - the location of this control varies according to the van. This control has an on off switch - which only controls the fan, and another switch which selects low or high speed. The on/off switch is three position - centre is off, up is automatic, and down is manual. There is a large rotary knob which in automatic mode controls the temperature by varying the fan speed according to the temperature, and in manual mode simply controls the speed of the fan. If the heater is switched off, then the fan simply circulates cold air, which is useful for keeping the air in the van moving around, but in practice is rarely used - it's easier to open windows. The automatic function quite often degrades with age owing to deterioration of the temperature sensor in the control box. You have to experiment to see what works best for you.

The fan does not take much electricity - about half an amp. A full battery should run the fan non-stop for at least 3 days.

(I have seen forum posts from owners asking if it ok to run the heating system all night - the answer is yes - it is designed this way! You should experiment with your system in different outside temperatures and you will soon find the settings which work best for you)

Like all things in the van, things need cleaning and servicing occasionally and the heating system is no different. The most common problem is a gradual reduction in efficiency which is caused by the blades of the fan becoming caked with years of dust and grime. It is important to remember that the air is drawn from inside the van, not outside, so all the cooking smells and particles contribute to this over the years. If you have bought an old van you have no way of knowing just how furred up your fan is - it will always work, but the system will only work at maximum efficiency if the fan is clean and shifting air at its designed capacity.

It is also important to keep an eye on the air distribution pipes (ducts) because after many years of use and vibration, they can occasionally get damaged or disconnected at one of the many connections around the van. It pays to know where the pipes run in your particular van, and keep an eye on them. A disconnected or damaged pipe can ruin the efficiency of the whole system.

A particular characteristic of this system is that in many old Hymers when the fan is running, it can "sing" - a high pitched gentle whine. This isn't a design feature - when the fan left the factory the fan would not be singing, all you would hear is the gentle rushing of air, depending on the speed of the fan. The singing sound develops over many years and is either due to a build up of dirt on the fan, which affects the balance, or the gradual wear of the fan motor bearings.

You can use the heater in "radiator only" mode - ie with the fan switched off. This is often useful for background heating the van because it uses no battery power at all in this mode. However I have seen some vans where the fan is always forced to be on to prevent over heating - S670 for example.

To get at the fan you have to get access behind the fire. Access depends on the layout of your van. Then you should be able to see the fan. Disconnect the wires and pipes from the fan - make a note or take a photo of where everything goes - it is very simple, just 3 or 4 screws. Then remove the fan - it is attached by just 3 screws. The fan may have a plastic cover which is easily removed. You will then be able to see inside the fan and you will see that the wheel is caked with a lot of dirt and dust. Clean everything carefully - compressed air helps. Then re-assemble. The only tools you need are screwdrivers and common sense.

This does not guarantee that the singing noise will stop - every fan is different - but it should reduce the noise, and it will certainly improve the airflow. What used to be just a gentle trickle of warm air from the vents might now be a proper flow - I have been amazed at the improvement in some of the heaters I have worked on.

It is a characteristic of Truma fans that after many years some of them sing - some more badly than others! If you do not like the sound of your fan after cleaning, then the only option is to change it. New fans are still around if you look hard enough, and I have read online that some owners have replaced the motor only.

While researching this article I found this web page which is very useful for manuals and schematics. There is also a load of info on Trumas if you Google - particularly on German forums - use Google translate.

I have also been asked can you run the fire when driving. The answer is no because airflow down the chimney will blow out the fire. However many owners forget to switch off the fire and drive away ... the fire will blow out and the safety interlock will kick in. At the end of your journey when the van is quiet somebody will say "what's that ticking noise?" - it is the ignition circuit. Many owners have a pre-drive checklist and switching off the fire should be on it!

Most other problems are not DIY jobs because they mean disconnecting the gas supply, the flue and removing the heater body. Jobs that needs this include replacing the ignition HT lead - covered in the other article, or replacing the burner assembly. The control valve at the bottom of the long rod from the control knob can also be replaced. These jobs should not be attempted unless you are fully confident and are absolutely comfortable working with gas and flues and can be fully confident that you have reconnected gas and tested for leaks. Gas engineers are certified for a reason - gas can kill you, as can carbon monoxide from an improperly connected flue.

However I must stress that the main subject of this article, cleaning the fan, has nothing to do with gas and can be done by most DIY persons. Or if you are not confident, a dealer (who knows his stuff!) should take a couple of hours to clean a fan, depending on how easy it is to get at the back of the fire. You could ask for this to be done when you are having other work done. 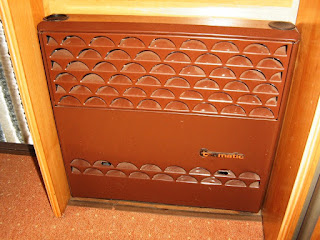 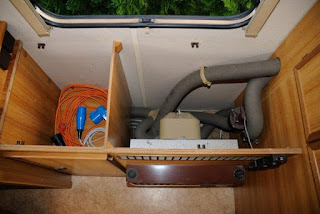 Behind the Truma. Every van is different - this one is easy access! You can see the aluminium hood and the fan is inside the cream plastic cover which is attached to the hood with 3 screws. Disconnect the pipes from the fan, and also the wires.
Also in this photo you can see the hot air pipes (also called ducts) leading off into the van - trace yours and check for damage and disconnections. If there are any then the whole system will not be at the right pressure and not efficient. You should have even heat coming out of all the round vents - if you have one or more vents noticeably cooler than the others, then that is a sure sign of a problem. 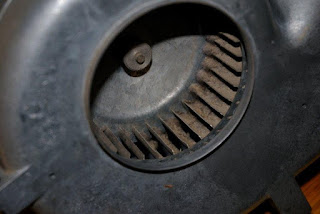 These are the blades you must clean. I have seen them much worse than this - so dirty that hardly any air flows at all!

These photos were taken from a German forum and I acknowledge this.
There are more photos and info on this German forum
https://www.wohnmobilforum.de/w-t64969.html

A collection of some of the articles and forum posts that I have posted over the years.

funkyronster
Lucky enough to have been able to retire early after a career in engineering and computers, I have now spent over 10 years on the road and over a quarter million miles.